The most volunteers recorded to date turned out the Magnolia Woods Pool yesterday (Saturday, October 10) for MWCA’s Fall Trash Bash.  A total of 21 residents from all corners of the neighborhood joined in, most of whom met at 8 a.m. at the parking lot for street assignments, coffee and donuts, and more than a little mingling of people and pets.  In fact street assignments ran out before the latest volunteers to arrive. 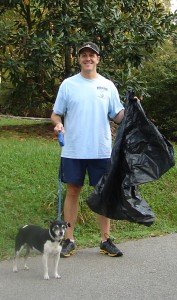 Scott Guidry and pal get an early start.

Several of the volunteers had other commitments Saturday morning but contacted Trash Bash Coordinator Jim Wilkins in advance, and picked up litter over the weekend. 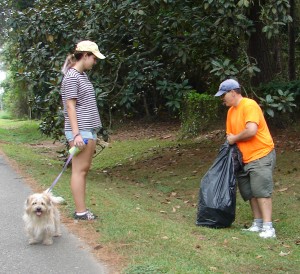 Although some neighbors scoff at the need for litter pick-up in a neighborhood that is generally tidier than most, those who participate see the gatherings as a way to meet neighbors, signal others that well-kept streets are a source of neighborhood pride, and a great excuse for enjoying the beautiful fall weather.

Litter also tends to collect along some of the neighborhood’s more highly trafficked streets and in areas where lots are undeveloped or homes are vacant.  Areas where drainage ditches intersect streets often need extra attention as well. 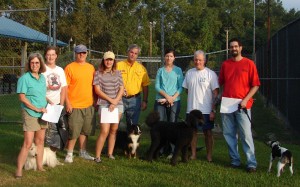