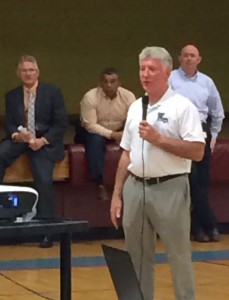 Chris organized the meeting through Nextdoor.com after he discovered the need in his community. “After reviewing some of the recent posts concerning crime and safety, it’s great to see that we are looking out for our neighborhood,” he wrote on Nextdoor. “It is also clear that some of the success stories where crime has been averted, interrupted, or brought to successful resolution that neighborly vigilance and intervention has been a big part of the success.”

However, Chris has worried about the safety of neighbors who have attempted to catch criminals “in the act” by following their getaway vehicles late at night, and those concerns led him to bring parish law enforcement agencies together with his neighbors to discuss ways to prevent and solve crime.

The seven officers and detectives who joined Moore and Morris are Brent Arceneaux, Ross Williams, Jeff Pittma, Joseph Durgin, Jeff Anders, Chris Palido and John Windham. Each took turns describing the level and categories of crime typical of this area and suggesting strategies homeowners can implement to keep their homes secure. District 12 Councilwoman Barbara Freiberg and neighborhood insurance agent Jim Crane also addressed the group. Moore was joined by Assistant District Attorney Will Morrison, who is leading the new Crime Strategy Unit in the DA’s office and gave attendees an overview of the program.

Crane provided useful tips for homeowners from an insurance perspective. He gave the following suggestions.

(1) Residents should inventory, photograph, and document valuable possessions so that law enforcement officers have the information they need to track these items and return them to their owners.

(2) Inventories should include the make, model, and serial number for each item.

(3) Owners should photograph the items in place or videotape each room to make it easier to make quick note after a burglary exactly what items have been taken.

BRPD detectives reinforced Crane’s suggestions, adding that area pawn shops are required to report all items they receive into a database, in case any of these items are stolen.

Level of Crime in this Area

The officers explained that the area represented by the four civic associations has a lower level of crime than many other parts of the city.  Very few crimes are being committed, and no violent crimes have been reported with the exception of one double homicide several years ago, they said.  In that instance, evidence suggests the victims were killed elsewhere and their bodies were “dumped” in a car parked near the corner of Albert Hart and Boone.  The other incident that has captured attention—arrests for prostitution at a rental property on Kimbro—is extremely unusual they said, and the perpetrators were quickly arrested thanks to the vigilance of neighbors.

The officer who investigates many of the crimes in this area said that most are “crimes of convenience”: thefts of items from unlocked cars and burglaries of homes while residents are away. Several burglaries in the Highland Park Drive area were discussed. “These burglaries all occurred during the day,” commented the detective tasked with solving the crimes. “The methods are the same in each case, and we think we know who the perpetrator is. That’s one thing we have going for us: criminals aren’t all that smart, and they make mistakes that lead us to them eventually.”

When asked how best to keep homes secure, he listed “dogs, video cameras, and alarm systems,” but, added that “no alarm system or camera will help if it isn’t turned on.” He cited several examples of crimes that were committed in homes protected by alarm systems that were turned off.  He also mentioned that safes can be great, but not if they are left unlocked or open – another circumstance he sees far too often.

One point that all of the law enforcement personnel stressed is the critical contribution neighbors can make to reduce crime in their areas. Of primary importance is to be observant. The officers and detectives who spoke with the group stressed that the best help they can get is a clear description of the suspects and their vehicles. They gave three tips for what to do in the event that you observe a crime.

(1) Get a good description of the person and the vehicle.  If possible, take a photo or put your cell phone on video and record the crime.

(2) DON’T confront the suspect. Never attempt to follow a vehicle that you suspect has been involved in a crime.

The officers all proudly noted improvements in communications across agency lines. “Communication among the various law enforcement agencies is better than ever,” Moore said. “The DA’s office, police, sheriff’s office, and state police are doing a great job of working together to solve crimes and to bring down the incidence of crime.”

One supervisor also noted that morale is suffering because all of the agencies are short staffed, and said BRPD is currently “short by 44 officers.” He cited low salaries (base salary $35,000 a year) as the main reason personnel are leaving and are hard to replace.  For example, the BRPD had only 28 applications for 35 vacant positions advertised prior to its most recent police academy.  Another said the personnel shortage makes it next to impossible for the department to provide patrol coverage to the entire city every day. Problem areas with high volumes of crime, including violent crime, receive the most coverage because the need there is greater.