Magnolia Woods neighbors should be dodging fewer and fewer fire ant mounds as the year goes on, thanks to all the residents who joined in the Spring 2016 Neighborhood Fire Ant Funeral. As in previous years, the Magnolia Woods Civic Association (MWCA) distributed fire ant sterilant free of charge this spring to all lots in the 16 filings the association serves. 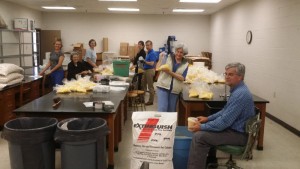 Eight volunteers gathered on March 29 to package Extinguish Professional™ fire ant sterilant into packets that were distributed throughout the Magnolia Woods area beginning April 1.  Each packet contained enough material to treat an average yard and included application instructions. The weather cooperated and most neighbors were able to treat their yards the following week.

A special thanks to this spring’s volunteers: 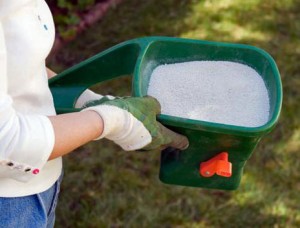 In addition to distributing sterilant packs, several volunteers treated the lots of neighbors who were unable to apply the sterilant themselves.  As in previous years, the association also loaned hand spreaders to residents.

“We feel really good about the level of participation this spring,” says Allyn Whaley-Martin who helped to coordinate the event.  “Only nine residents declined to participate, and we had more volunteers than ever before.  Residents are also getting more comfortable with the process, now that they’ve done it a few times.”

Extinguish Pro™ is not an insecticide.  It is a sterilant specially formulated to prevent fire ant queens from laying viable eggs.  It is spread thinly throughout the yard rather than applied to mounds to be found by fire ants foraging for food.  Fire ant populations decline gradually because queens are not able to replace aging ants.  The sterilant poses no danger to children, pets, or even beneficial insects.

Residents who have not spread the sterilant already should do so immediately so that fire ants in their untreated lot do not re-infest neighboring yards that already have been treated.  Residents who have questions or need to borrow a spreader should contact the association at brMWCA@gmail.com, or can select this link to download application instructions.